Recent research work has investigated the impact of attributes (e.g., budget, release time) in predicting the box-office revenues1. Particularly, lead actors have been considered as one of the critical drivers for success in the motion pictures industry2.

However, an important attribute in forecasting the box-office receipts has remained mostly unnoticed: what and how people talk about movies in the media.

How people talk about a movie in the media is not only a way to know a speaker’s view about a movie, but it will also influence others and could indicate the eventual success of a movie.

One salient research question in our study is to examine how the sentiments in the quotes related to a movie influence the box office revenue after the opening period. We perform text analysis and statistical testing methods to show which text features from a speaker’s quotes might influence the box-office revenue. 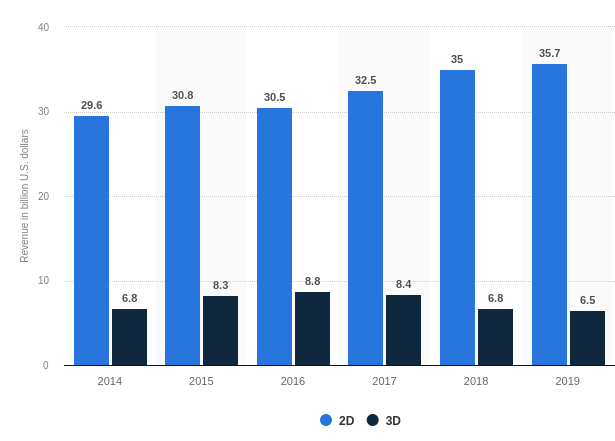 Global box office revenue per year by format, from 5

In recent years, numerous research work has uncovered which attributes might predict the financial success of motion pictures after they were released, and why some movies could be “hits” or “flops” using automation methods678.

We explore the important role of the quotes related to movies in the media, and its effects on influencing audiences’ decision to go to the cinema after its release. In particular, we are focused on the proportion of opening revenue (revenue in the first week) in the overall box-office revenue, to measure the financial success of movies.

It is more relevant to examine the effectiveness of a speaker’s quotes on the box office revenue. We expect that how people talk about movies in the media will not generate immediate effect on box office revenue in a very short time period (i.e., within one week after release dates). More people are interested in going to cinema after the positive reviews has widely spread over a period of time in public.

In our study, we investigate the following sub-questions:

1. Pre-analysis: Influence of the crew’s quotes

The first thing we wanted to make sure of was whether we actually had quotes related to a movie, in particular using the crew list, and see if any information could be extracted from this, like the quality of the quotes. Thus, we decided to plot the average amount of quotes authored by the film crew around the release date.

Our first observation is that we indeed have quotes from the crew, which is a good start !

There is a peak in the number of quotes in the media coverage within the week after the movie has been released. For this reason, we can assume that the main crew has been engaged in frequent media exposure for movie promotion around movie release dates. The global shape of the movie crew’s average number of mediatic intervention resembles a normal distribution centered a few days after the release, starting to rise two weeks before, and lasting until three weeks after the release.

As the main question of this article is to observe the influence of the quotes on the success (represented by the total gross), we also wanted to see if any correlation could be observed between the number of quotes and the total gross. 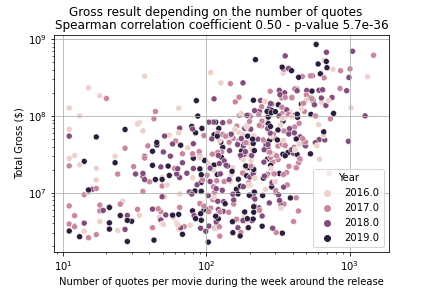 There seems to be an overall trend, that there is a correlation between the number of quotes and the total gross, specifically a power law relation. This is confirmed by a statistical analysis (Spearman), although the dispersion of the results seems to be quite important for the movies with a small number of quotes.

These two artifacts introduce interesting relations between the mediatic life of a movie and its success. However, the first plot shows that during the whole year around the release there seems to be an average of 2500 quotes, which made us realize that there were probably lots of false positive in our data, and that the simple criterion of using the quotes authored by the crew was not enough.

Our first approach to relate quotes to movies didn’t use sentiment analysis since crew member would probably not speak freely about their movie, their role is to sell it, so they can’t actually say if they think it’s bad. In this part we propose a different approach.

In particular, instead of using the quotes from the crew, which are biased and contain a lot of false positive (all quotes from the crew aren’t necessarily about the movie), we extracted the quotes which mention the title of the movie or a related term, ie. for the movie Star Wars: Episode VII - The Force Awakens, we search for quotes that mention Star Wars or The force awakens.

This method is not foolproof either, some movies like It or Sing yielded a lot of false positive and we had to ignore them in our analyses. Even movies such as Thor: Ragnarok, where we searched for Thor and Ragnarok, triggered lots of false positive as a word like auTHORities was matched !

However, the quotes we extract with this method still are overally more meaningful and more feated to sentiment analysis.

We first performed sentiment analysis to explore to what extent sentiment polarity from a speaker’s quotations in coverage press affects the financial success of movies. More precisely

We investigate a possible correlation between box office revenue and average sentiment polarity score for movie related quotes in the Figure 3.

To quantify our analysis, we used Spearman correlation and Pearson correlation statistical tests. The results from both tests are not statistically significant, it is inconclusive to say whether sentiment polarity from quotes about movies influences a movie’s financial success from our first data analysis.

This is not too surprising. For instance a blockbuster movie with high budget is very likely to generate high box office, even if people are very critical about it. For instance can you imaging a Star Wars movie with very low box office revenues, regardless of how critical people talk about it ? Probably not !

Note that it could also mean that our analysis is imprecise or that the set of quotes we extracted isn’t of good quality. To sort this out, we decided to perform further analysis, to see if we could prove or disprove our first hypothesis.

In order to check whether the explanation of the previous results was really that some movie saga with a big fanbase would always yield a great box office result, we included another metric: the opening revenue, which is the box office revenue in the first week.

We compute the proportion of the opening revenue of the total gross revenue. We are indeed interested in finding out, whether speaking positively about the movie in media actually influences audience’s intention to go to cinema even after the opening period.

Thus, we need to check whether there is a change in revenue between the first week and the followings. For this purpose we plotted the first week results depending on the average sentiment score of the quotes:

From Figure 4, although there is a high variance, we can see that movies with more positive voice in the media seem more likely to have a smaller percentage of the total revenue the first release week, and this relation is actually statistically significant.

We propose a simple interpretation: good movie will be praised in the media during the first release week, which can result in more people wiling to watch the movie later on. This implies that movies with positive reviews will have an opening revenue smaller in proportion since people will come see the movie later and will keep showing up for a longer period of time.

On the other hand, a bad movie will attract less people after the first week (because critics have revealed that it isn’t a great movie), and so the relative revenue is higher on the first week.

The basic idea is that people will show up the first week in any case, but the following weeks people will come more if the movie was deemed good by the critics.

To further confirm our findings from the previous sentiment analysis, we computed, from movie related quotes, scores for six lexical terms: warmth, fun, love, emotional, disappointment and hate. The reason is that those six lexical terms could be employed to understand how people who talk about the movie in the media feel about it and what they experienced.

In Figure 5, we plot a bar chart for the average scores of six lexical terms, in three groups: high, intermediate and low first week percentage of box office revenue.

We found a statistically meaningful difference (thanks to a t-test, p-value 0.03) relation about the first week revenue and the amount of hate related terms: people use more hate related words to describe movie that have a higher opening revenues proportion than those with low opening revenues.

We can say, it seems that good movie gets more audiences for longer time period and more positive voices in media will boost its effects. Although the results are not as conclusive with the other lexical terms, the trend is mostly the expected one: positive terms are associated to movies with high opening revenue proportion while negative terms are related to movies with low opening revenue proportion.

Our study examined which attributes from media quotes related to a movie is associated with the box office revenue around the release weeks.

The results indicate that a positive voice in the media might result in higher box office revenue over a period of time after the first release week. That means that movies with high revenue after the first week (relative to total revenue) are more likely to be associated with more positive words from media.

Although we did not take into account other possible attributes such as casting stars, movie genres for the association with the box office revenue. Our study reveals important finding that audiences tend to choose movies with more favorable voice from media. Similarly, more hatred words about a movie in media seem more likely to discourage audiences from visiting cinema, even if those movies get big success in the early stage of their life cycle.

In our study, we combine the quotation-centric version of the Quotebank database9 with the IMDb movie information database 10 and box-office receipts from Box Office Mojo11.

Firstly, IMDb movie database, contains six types of movie data: (i) movie name title; (ii) the genre of movie, such as comedy, fantasy category; (iii) the release year (we select the movies in the year 2015-2020); (iv) region (focus on U.S. and U.K.); (v) runtime (in minutes); (vi) main people involved in the movie.

After that, we merge both datasets together by movie name and release year.

In the end, we extract key people in the movie (e.g., actors and actresses, director, and producer) in order to retrieve their quotes from the Quotebank database9. By doing so, we assume that the spread of a quote from a movie associated key figure might influence the financial performance of the movies.

We also extract, for the top 50 movies in term of box office revenue, all the quotes that mention these movies or a term related to these movies, in the 25 weeks around the release date.

All the code that we wrote to read, combine and analyze datasets is on https://github.com/epfl-ada/ada-2021-project-pyca/.